Chinese medicine is based on three fields: acupuncture and moxibustion, medicinal herbs, and yangsheng (life nourishment). Under the Japanese system, practitioners of acupuncture and moxibustion in Japan cannot prescribe medicinal herbs. This is due to the fact that in Japan the prescription of medicinal herbs requires a different license, either as a medical doctor or a pharmacist. Nevertheless, knowledge of these medicinal herbs is indispensable to understanding the true essence of Chinese medicine. Furthermore, although yangsheng (“yojo” in Japanese, lit. “life nourishment”) was made famous in Japan by the Ekiken Kaibara book Yojokun (Book of Life-Nourishing Principles), it is also true that yangsheng is indispensable in the prevention and treatment of disease.

Toyoshinkyu hosts classes not only on yangsheng but also on medicinal herbs. This is to develop clinical practitioners with a broad base of knowledge. In turn, this allows for Toyoshinkyu to foster the development of practitioners of acupuncture and moxibustion who have expansive adaptive capabilities.

Toyoshinkyu teaches methods suited to modern people as well as the traditional methods.

Once Japan entered its Muromachi Period, physicians were invited from China and Japanese people went to China to study, establishing an active academic exchange. In China, acupuncture had replaced moxibustion as the main form of treatment, and, subsequently, acupuncture spread throughout Japan. Moxibustion did not fade or decline, but remained a prominent form of treatment. It is presumed that the traditional “nine needles” of acupuncture emerged during this period. It is believed that there was study of the use of many types of needles.

The acupuncture needle commonly used in Japan is a thin filiform needle called goshin. Many types of needles are included in the traditional nine types of needles, for instance needles that are not inserted into the body, wide needles, long needles, and needles used to make incisions. A certain amount of time is required to acquire skills with these needles, and as such we focus extensively on this in the Acupuncture and Moxibustion Course at Toyoshinkyu.

Japan entered a time of isolation during the Edo Period, leading to an interruption in exchange with China. This period marked a transition from a time of “learning” to a time of “independent development”. Japan’s collected learning in the therapies of moxibustion and acupuncture formed the foundation for the creation of a new medicine of acupuncture and moxibustion, one that suited the constitution of the Japanese people. During this period, thin needles matching the constitution of the Japanese people were developed. Needle guide tubes to make these thin needles easier to insert were also invented during this period. Furthermore, acupuncture techniques unique to Japan were developed, such as da-shin (a type of acupuncture using a needle inserted by tapping with a small hammer). 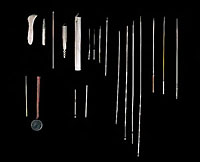