Diagnostic methods in Chinese medicine have traditionally been categorized into four components.

Inspection means observation. By observing such elements as the color of the face, the light in the eyes, posture, and movement, it is possible to determine whether or not there is shin-ki (the energy of life) and to determine a sick person’s prognosis. For example, in the five zàng organ system of traditional Chinese medicine, a face color that is an unhealthy white could indicate an issue with the Lung (LU).

Auscultation means to listen with the ears, while olfaction is the smelling of odors. Information is collected by listening to a sick person’s voice and the sounds of their body, as well as through their body odor. For example, in the five zàng organ system of traditional Chinese medicine, a burnt odor could indicate an issue with the Heart (HT).

Inquiry refers to a diagnostic method of questioning and answering. In the traditional forms of Classical acupuncture and moxibustion, disease is believed to be a disruption of the balance the body and mind as a whole. A wide range of information is collected during this stage, not only just information about the most severe symptoms, but also dietary preferences, sleep details, stress levels, and connections with employment. For example, in the five zàng organ system of traditional Chinese medicine, a preference for sour tasting foods could indicate an issue with the Liver (LR).

Toyoshinkyu places special emphasis on pulse diagnosis, abdominal palpation, and palpation. There are only a limited number of schools that teach these diagnostic methods in Japan because of the extreme difficulty of these methods, a difficulty that mandates highly skilled and refined sensibilities. Toyoshinkyu instructors are veteran clinical practitioners who provide detailed instruction from theory to practice. The Acupuncture and Moxibustion Course in particular emphasizes the palpation of meridians. Becoming proficient in these diagnostic methods also provides a shorter path to becoming a high level practitioner of acupuncture and moxibustion. 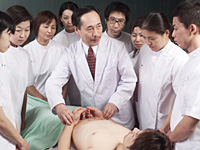